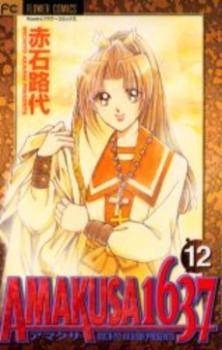 From Aerie Scans: A group of friends during their Senior Trip upon the cruise ship Victoria, suddenly get pulled back in time and separated. The main character, Hayumi Natsuki, arrives in the year 1636. In Japanese history, Christian rebels revolted in 1637, led by a young man known as Amakusa Shirou, resulting in thousands of casualties. However, when Natsuki arrives in the past, she and her friend Eri discover that Shirou Tokisada is already dead. Meanwhile Natsuki, according to the village folk and Shirou's parents, looks exactly like their late son (never mind the fact that Natsuki is female). Natsuki, the kendo champion of her school, heir to her family's Hakuhouryuu kendo style, simply cannot stand by and watch innocent people be persecuted simply because they are Christian. Soon she even becomes known as an angel, sent from God, whose coming was prophesized 25 years before. But what will she do when old friends become new enemies?