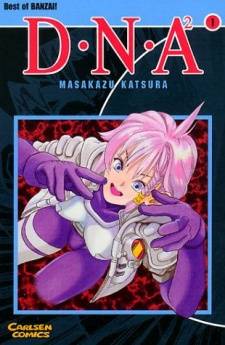 Japan in the future has a massive over-population problem. Scientists have traced the root of this problem to one particular individual, Junta Monamari. According to their records, Junta was a &quot;Mega-Playboy&quot; who had sired children with over a hundred women. Each one of his sons had inherited the Mega-Playboy gene too, so the problem grew exponentially from thereon. Enter Karin Aoi, a &quot;DNA Operator&quot;. Karin is sent back to the past with a mission: to alter Junta s DNA and prevent him from ever becoming the Mega-Playboy, thereby eliminating the world s overpopulation problem. Junta s DNA can only be altered by shooting him with a special bullet called DCM which contains the chemical for suppressing the Mega-Playboy DNA. In return, Karin gets a vast sum of money... enough to make all her dreams come true. Will Junta become the playboy he is destined to be, or will his better self prevail? But Karin is falling for the real Junta too... and what of the sweet and kindly Ami who has secretly loved Junta all her life? What will happen to future Japan?