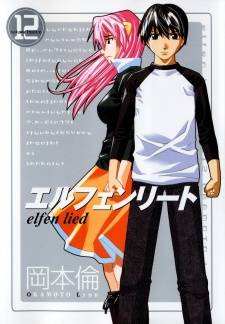 The story involves human mutations called "diclonii", who are born with horns on their heads and possess telekinetic powers, in the form of invisible "arms" called vectors. The power of these arms vary, but they can stop normal bullets and deflect some others. The number of them differ with each diclinous, as does their full range. The tendency for violence among diclonii is high, especially as they grow older. As children, their violence stems from a certain playfullness, unlike the absolute hatred of humans in their later years. Diclonii are rare, as they are the members of their species that are able to reproduce naturally. Silpelits are more common. They are the offspring of two humans, the male of which has been infected with the mutation. Interestingly, only males can pass on the genes, and all diclonii and silpelits turn out to be female. Certain scientists noticed an increasing number of babies with horns being born, along with those children murdering their own parents and others, and tried to contain the spreading and find out the cause by placing them in a Facility in cells where they are subject to inhumane experiments to test their abilities or were they await execution for being too dangerous. The main non-mutant character in the story is Kouta, who ends up becoming increasingly involved with one diclonius in particular, the main mutant character Lucy, the only pure diclonius, as she seeks a way to infect or kill all of humanity. Lucy has a cruel and unsettling past, and she has long since lost her empathy for humans, except for Kouta. However, Director Kakuzawa, who has diclonius ancestry although he doesn't have the vectors, has plans to mate with Lucy and start a true diclonius race. If Lucy is found and he manges to do so, humanity will be nonexistent. Kouta and Lucy's lives have been intertwined since their childhood, but not necessarily in a good way. And after the virus is airborne and spread across all of Japan, what is the fate of humanity and who holds all of the answers? (Written by MAL member: luvsanime02)