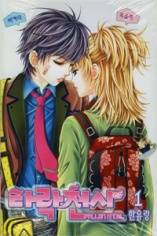 Hajin Seo used to be a cheerful girl. But while trying to protect her friend Mina, she had to commit a series of things that could have been avoided. And the incident caused her to think she killed the friend. Mina, however, is not dead but she has been scarred severely. A teen star named Yunu who met her before the incident wants to see her old self again. He wants to bring his first love back to how she was before. The hot Jeha Han is nice to her, the loner girl, at first. But he has a secret. He is the brother of Mina, and he is willing to do anything to get revenge on the person who harmed her. Hemi and Yungju will pair together in order to get their unrequited love fulfilled. Hemi wants Yunu, and Yungju wants Jeha. And all their arrows point directly at Hajin, who is scarred already. Once she was an angel, the popular girl of the school. But now she is a fallen one, one that can only watch from behind as many go against her.