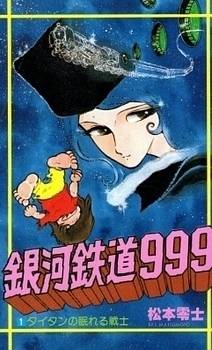 In the future, mankind has been able to create machine bodies so they can be able to live for thousands of years. Humans are now second class citizens and if they do not acquire an mechanical body, they are either hunted or forced to live a life of poverty. Tetsuro Hoshino is a young boy who mother is killed by the machine men for a hunting trophy. Outraged, Tetsuro seeks out revenge and vows to keep his word to his mother to get a machine body. He soon meets a woman named Maetel who gives him a free ticket on the space train Galaxy Express, which if he rides, he will be able to receive a free mechanical body. But nothing is as it seems as rumors rise that all who board the train never return. This is a story of how one boy learns about the world and his quest for a new body. Note: Viz released five volumes of the second Galaxy Express manga. The original manga has yet to be translated into English. --Wiki Note: Reprinted under the new name Sayonara Ginga Tetsudou 999.