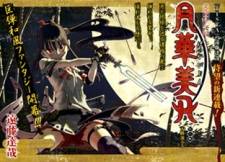 Based on the early Japanese literature Taketori Monogatari, this is a story about a Princess exiled from the moon and her story on Earth. On the dark side of the moon exists a highly advanced civilization divided into two clans, the Takenouchi family and the Umenouchi family. Takenouchi Kaguya is the daughter of Takenouchi Fumiya, the acting queen of the clan. Kaguya is the next in line for the position for queen but she refuses to be obedient and wants to enjoy life. The bratty Kaguya despises her mother and the people around her for being so strict and often wishes she was never born as a princess. Queen Fumiya has been severely ill for many years now, but has kept it from her daughter in order to protect her but her condition has worsened. The Umenouchi family takes this opportunity to start a coup and takes over the government. Knowing that she is not able to ensure her daughter’s safety on the moon, Fumiya sends Kaguya to Earth with the powerful katana that symbolizes her ownership of the moon. Without the sword, the Umenouchi family cannot usurp control of the moon. Kaguya is forced to mature and become stronger in order to take back what was once her mother’s!