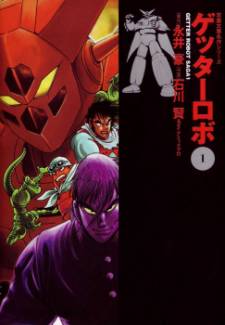 Ryoma Nagare, Hayato Jin, and Prof. Saotome pilot three specially designed combat jets, which can be combined together in different forms to form three different kinds of giant robots, Getter-1 (used for aerial combat), Getter-2 (for land-based conflicts), and Getter-3 (for undersea battles). They were assembled by Prof. Saotome and became Earth's first line of defense against the Dinosaur Empire, which is a civilization of reptile-like humanoids, who evolved from the now-extinct dinosaurs that roamed the earth millions of years ago. The series was groundbreaking in the anime mecha genre: for the very first time, it introduced the concept of separate machines combining to form a super robot. Using three jets, Getter Robo could combine in three different ways to create three different versions of Getter Robo for different conditions and situations. This idea was originally discussed during the creation process for Mazinger Z (the first super robot to be piloted internally), but was dropped and then developed for Getter Robo. This combination idea proved to be a very powerful concept that has been used in the super robot genre ever since.