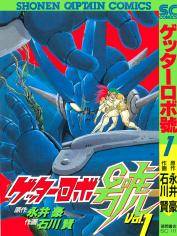 Sixteen years after the completion of Getter Robo, Ken Ishikawa revived the series with Getter Robo Go. This series, and all after until Ishikawa's death, are done without Go Nagai(he is still credited as original creator). Years after the events of Getter Robo/Shin Getter Robo, Hayato Jin is the leader of NISAR; a private owned research and weapons development organization based in Japan. He, and Professor Tachibana, have been developing various weapons and building up their forces to deal with a threat that started fifteen years ago: the mad scientist Rando. When Rando's forces begin their terrorist operations around the world, NISAR begins its search for exceptional soldiers to pilot their super weapon, the Getter Robo.