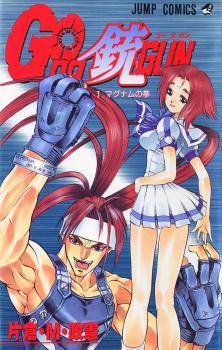 This is all about a 16-year old guy named Gun(family name: Goda) who, along with his various fighting -video-game-styled pals, opposes the very naughty Hanged Cross gang on an alarmingly regular basis. As the story begins, Gun is a juvenile delinquent who has been booted out of one too many schools for chronic bad behavior. Gun's father, a hotdog supercop with the moniker of "Dan Goda," is fed up with this situation to the point where he decides to send Gun to his old educational institution: a fighting school called Roju Private School. There, Gun learns to harness his raw abilities into "Gunfighting," the family martial arts style resembling firearms. Think .44 Magnum punches, Shotgun Fists, Sniper Stances, and you've got the essence of Gun-Fu down. At his new school Gun also falls madly in love hot chick Yuki and runs afoul of 17-year old transfer student and sure-to-be-rival Raida, prodigal master of the Hanged Cross technique. Fights over Yuki's affections take place in the school stadium, but it turns that she has little need for defenders of her honor. Yuki is, like an overwhelming majority of students at Roju, a fantastic fighter. And from here on out, everbody is not only "kung-fu fighting," but also busy filling pages with over-the-top battle scenes.