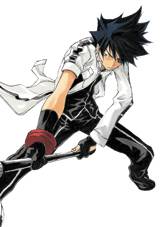 Based on the upcoming PSP game of the same title: AD2072, fearsome monsters, known as "Aragami" (Bewildered?Gods), appeared on Earth and start preying on humans. Human population had decreased down to 1/100 in just a few years, and the world is about to come to an end. However, there's one group of people who battles with these fierce monsters, using the biological weapon, known as the "Jinki" (God Device). These people are called as "G.E." (God Eaters). This manga revolves around one of the God Eaters, Silva, and his conquest to bring back the hope of humanity... (From Mangahelper)