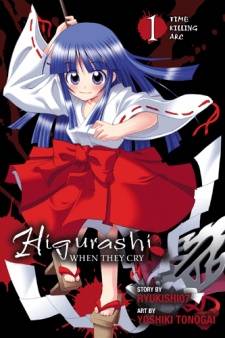 After moving into the quiet town of Hinamizawa, Maebara Keiichi spends his days blissfully in school often playing games with his local friends. However, appearances can be deceiving. One fateful day, Keiichi stumbles upon news of a murder that had occurred in Hinamizawa. From this point on, horrific events unfold in front of Keiichi, as he soon learns his close friends may not be all that they seem. Based on the amateur mystery game by 7th Expansion, the story is told in a series of different scenarios. Himatsubushi is the fourth in a series of manga following the different scenarios of the Higurashi games. It focuses on Akasaka Mamoru, a police investigator from Tokyo and his visit to Hinamizawa a few years before the murders.