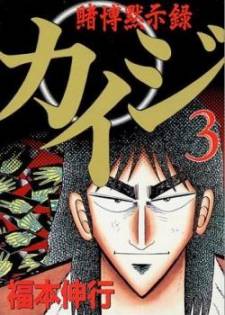 Japan, 1995. After graduating from high school, Ito Kaiji moves to Tokyo to get a job, but he fails to find steady employment because the country is mired in its first recession since World War II. Depressed, he festers in his apartment, biding the time with cheap pranks, gambles, liquor and cigarettes. Kaiji is always thinking about money and his perpetual poverty frequently brings him to tears. Kaiji's unrelenting misery continues for two years until he is paid an unexpected visit from a man named Endo, who wants to collect an outstanding debt owed to him in Kaiji's name. Endo gives Kaiji two options - either spend ten years to repay this outstanding debt, or board the gambling ship Espoir ("hope" in French) for one night to clear the debt. Using a con, Endo pressures Kaiji into accepting the deal, believing he will never come back from the voyage. The Kaiji series is divided into four parts: 1. Tobaku Mokushiroku Kaiji 2. Tobaku Hakairoku Kaiji 3. Tobaku Datenroku Kaiji 4. Tobaku Mokushiroku Kaiji: Kazuyahen Note: This manga officially ends at 13 volumes. Scanlated volumes 14-26 begins as volumes 1-13 in part 2 of the Kaiji series, Tobaku Hakairoku Kaiji.