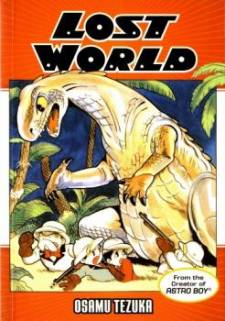 Having been torn from the earth in ancient times, Planet Mamango is now re-approaching the earth after a lapse of 5 million years. One night, a private detective named Ban Shunsaku encounters a murder, and meets boy researcher Shikishima Kenichi, who holds the key to solving the case. Shikishima discovers that a stone from the Planet Mamango generates huge amounts of energy. Making a rocket out of the energy stone, Shikishima sets up an exploration team and departs for Planet Mamango. The rocket heads straight for Planet Mamango under the command of Shikishima, along with Captain Butamo Makeru, Ayame and Momiji, who are cabbages created by the captain, a rabbit named Mii, and Ban Shunsaku. In due time, the rocket lands on the Planet Mamango, where the group finds a “The Lost World,” an ancient environment where dinosaurs walk about and ferns and cycads cover the ground.