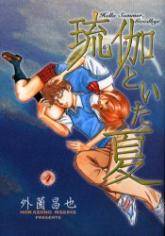 Luca, the Summer I Shared with You

Toono-kun’s life has gone out of control, all due to a strange accident that he can’t explain. There was a flash out in the school yard where his younger sister Yayoi was doing track and field, and a number of people were injured, including Yayoi. Yayoi was lucky and got out of the hospital the next day – only she doesn’t act like herself anymore. What Toono has discovered is that his little sister is gone, and has been replaced by a soldier named Luca from 31 years in the future – and he alone knows it!