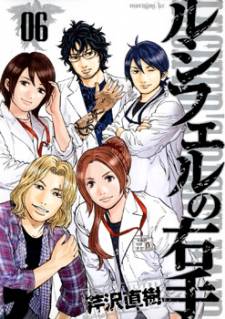 Three years ago, Katsumi Yu headed to Africa for a volunteer project as a doctor. However, soon after, a civil war erupted and he was captured by a guerilla group who was desperate for a doctor to treat the injured. He kept doing what he came to do, help people in need, and he does this for several years. But with the regime change in the country, the guerilla group was hunted down and Yu was forced into a situation of kill or be killed. He quits being a doctor soon thereafter and gets a tattoo of Lucifer on his right arm as a reminder of his past crimes. Although Yu returns to Japan, he spends his days drinking. After a night of drunken brawls, he wakes up in a clinic run by Dr. Minatono. This shady looking clinic takes in all patients, even those without insurance or can’t even pay but still maintains state of the art equipments. It turns out Dr. Minatono deals with clients, such as the mob, who are unable to go to regular hospitals due to legal reasons and in exchange receives exorbitant amounts of money to help keep the clinic up and running. At first, Yu rejects the job offer from Dr Minatono, but situations keep coming up that keep him busy in the surgery room.