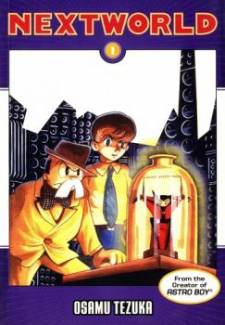 As is the case with much of Tezuka’s work, the main plot of Nextworld deals with Earth in the Atomic Age. Radiation and nuclear testing has led to the creation of many strange, almost supernatural species of animals, and it seems that every major nation on the planet wants to discover the secrets of these creatures and how to best harness atomic energy for their own purposes. Tensions rise as political conflicts escalate, and it seems that a third World War is inevitable. A strange mix of scientists, politicians, and young adventurers may be Earth’s last, best hope against corrupt government officials, armed forces, robots, and secret societies. Meanwhile, the boy detective Kenichi, the young Rock Holmes, Shunsaku Ban (Mustachio) and others discover the Fumoon, a race of tiny, telekinetic humanoids who evolved in Australia, and have their own plans for dealing with the impending apocalypse.