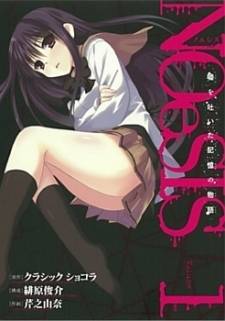 Adapted from a visual novel. A girl who can capture the memory of whoever she's in front of by just looking into their eyes. A childhood friend who lives with two red-smeared eeirie dolls, convinced they are her parents. A sickly little sister who manipulates persons by just smiling. The protagonist meets these girls who lack something, and gets involved in strange events. This slowly gnaws at his heart, like tracing with a fingertip the reminiscences of a distant day. A sad, and somewhat nostalgic, story about memories. -------------------------------------- From MangaHelpers: Shishikura Shigure is an ordinary high-school student, who is into gal games, figures, and late night anime. He tends to be pretty oblivious of most of his actual surroundings, particularly at school. Since his parents have gone overseas for work, his childhood friend Koyomi has taken charge of caring for him. One Wednesday, one of Koyomi's friends is missing, and she seems overly concerned. She explains to Shigure that one month ago, a student at their school threw herself in front of a train. On every Wednesday since then, a girl at their school has killed herself. She warns him not to get involved, but Shigure decides to look for Koyomi's friend. Shigure ends up at the scene of the crime, where he sees a darkly mysterious girl who claims she can peek into people's memories. Shigure learns later that she is the student council president, but why was she so cavalier about her classmate's death? Could she be involved, and will Shigure be able to stop this string of supposed suicides? [tethysdust]