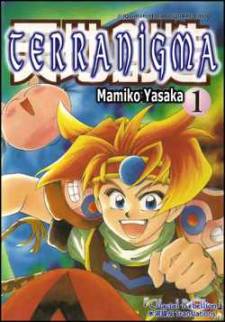 Manga based on the Tenchi Souzou (Terranigma) game published by Enix in 1995 for the Super Nintendo video game system. It portraits the story of Ark, a young golden haired boy, that lives in the secluded village of Crysta, in the Underworld. Ark is the local troublemaker and lives at the Elders place. One day, while the Elder is out, some guys ask Ark to open a blue door, which had always remain locked. Ark manages to break the door open and inside, he is lead to a box. By opening the box, Ark unlocks both a freezing curse to the villagers of Crysta, but also the power to overcome the curse and utterly change the world. Now, the ever isolated city of Crysta has a gate, and Ark must venture through several ordeals to restore life to the village, and on the way, he will uncover many secrets and find an even greater purpose that would lead him far beyond the reality he knew.