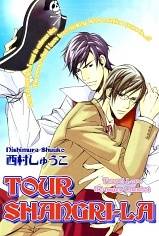 Kanou has travelled the world and seen many things, but the one thing that has haunted him for years is the sight of his father making love to a young man. The image burned into his memory is that of the young man, whose body pulsated with pleasure, and Kanou dreamed of being the one giving the pleasure. As a present for beginning a career, Kanou is on Tour Shangri-La, where any dream can be fullfilled. Can the tour guide Asada help this dream become a reality? Amd why has Asada, who hasn\'t been a tour guide for years, decided to accept Kanou\'s tour? (from B-U)