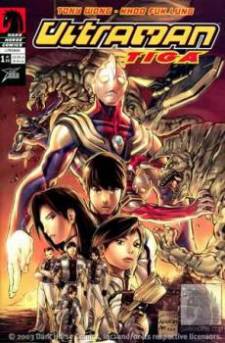 Presenting the red-hot series from Hong Kong, translated in English for the first time!. Ultraman Tiga is brought to you by international superstars Tony Wong and Khoo Fuk Lung. In the year 2049, the Earth has settled into a period of relative peace, thanks in large part to the global efforts of GUTS--the Global Unlimited Task Squad--an international alliance dedicated to protecting mankind from threats within the planet and beyond. But when a mysterious meteor carrying an ominous message crashes next to GUTS headquarters, it heralds the end of peacetime and the return of the giant monsters that terrorized humanity many millions of years ago. Mankind's only hope is to find the lost land of Tiga and reawaken the 160-foot-tall warrior Ultraman!