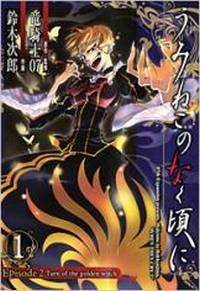 Fall 1986...in Rokkenjima, a private island owned by Kinz? Ushiromiya, eleven of his relatives arrive for a family reunion. He is dying and children want nothing more than to split the wealth he will leave behind. But as a storm traps them on the island, the riddle of Rokkenjima's legendary golden witch begins to take the lives of several people. Who can solve the riddle and gain the gold &amp; the inheritance? Will the golden witch truly revive? The story is divided into episodes: four &quot;Question&quot; arcs. Each episode keeps the same main characters, but ends in a different way. However, each episode gives valuable answers, hints, and clues to the previous one, while at the same time bringing forth even more mysteries.The question arcs are: Legend of the golden witch, Turn of the golden witch, Banquet of the golden witch, and Alliance of the golden witch.