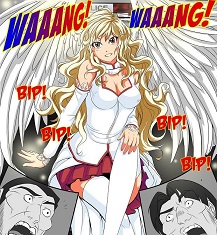 This is a manga/anime inspired, North American comic. Max wakes up one night, in the middle of a street and quickly realizes he doesn’t know who he is, or how he got there. Soon after, Max discovers that he’s dead, and now residing in a parallel dimension called Tenkumo. In this dimension, Max must discover who he is if he hopes to help the escorts of souls keep balance in the universe. However, the Supreme Overseer, Owari-Rin has grown tired of the continuity of existence, and has set in motion a plan to bring an end to the previously endless cycle of life.