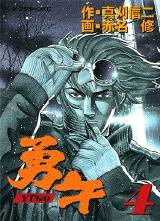 Yugo Beppu is a master negotiator and mediator. Fluency in five languages, Socratic wit, and a deep understanding of human nature combined with top-level international connections make him a formidable operator. When a woman's father is seized by Dacoit bandits in Pakistan, Mayuko seeks Yugo's help. After complex and dangerous negotiations, he secures his release. After this success Yugo is called in to deal with yakuza in Japan, triads in Hong Kong, the IRA in Northern Ireland, and the Russian Ministry of Internal Affairs in Siberia. (Source: M-U)