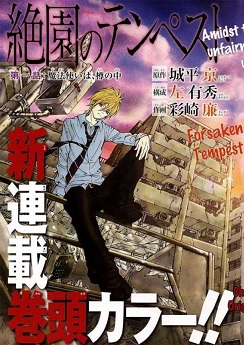 Yoshino Takigawa is visiting his friend`s parents and sister`s grave. After he gets there, he is met by Evangeline Yamato, a woman looking for his friend Mahiro Fuwa, who left a month ago to find his family`s killer without any clues to who it might be. Evangeline informs Yoshino that two places where Mahiro has been spotted have been quarantined, due to an epidemic. When Evangeline is questioning Yoshino at gun-point, Mahiro comes out of nowhere and swiftly saves him and can stop bullets in mid-air, claiming to be a sorceress`s assistant; not just any, but the strongest sorceress`s, Hakaze Kusaribe, who promised to help find his family`s killer with her magic so he can kill them himself. After saving him, Mahiro informs Yoshino about the epidemic, a curse that turns living things into metal, claiming sorcerers are causing it and that it is just the beginning.